Usually, being a planner works to my advantage. It’s how I have been able to do everything I’ve accomplished. But it also means I often have races or other family events scheduled well before circumstances change. That’s certainly why I ran both the Boston and London marathons recently. Despite that, I have been dealing with a stress fracture and other injuries for almost a year. They were my first and second marathons in a very long time.

Both races were repeats – I don’t normally like to do that (too many other courses and cities to experience). But I had special reasons to do both World Marathon Majors again. I went to Boston to support my good friend, Jen Metcalf (aka – “Big Sexy”). Jen was one of the stars of my book. She continues to be a friend who provides me with support, encouragement, and many belly laughs. She wanted Boston to be her 100th marathon, and I certainly wanted to be there with her to celebrate the milestone.

London was on my schedule for a bigger reason too. Allen, my loving, supportive, husband, picked the city as the trip to celebrate our silver wedding anniversary. It’s not my fault that the London Marathon is the same week as our wedding date. Allen had never been to the city, and he certainly didn’t need to twist my arm when he suggested we run the marathon while there. London is one of my favorite cities and so is the race.

Coming back from the injury though wasn’t the only obstacle of my double-race return. Both races presented polar opposite weather conditions – extreme cold rain and wind to full sun and heat. Gee! Thanks, Mother Nature. What a great way to be initiated back into marathon running! I have now done 149 marathons in all sorts of weather. I can usually gut out any type of weather condition, but I would call the two experiences two of the most daunting set of weather conditions I have ever run. And, I have done races in Antarctica and the Petra, Jordan desert.

Jen and I were seriously studying the weather up to a week before Boston. I reminded Jen and myself that there was plenty of time for the weather to change. Usually, I don’t even look at the forecast until a few days before the race. There’s no need to stress over something that can’t be controlled. But, to our dismay, the originally bad forecast only got worse as we got closer to race day. The race staff sent out several emails about how to dress for the impending heavy rain, high wind, and low temperatures that were descending upon the city.

Included in the warning was a reminder to the participants that the risk of hyperthermia was very real. The race staff tried providing tips on how to dress for race day.  In the end, thousands of participants did end up getting treated for hypothermia. It turned out to be an event that will most likely go down in history. (If you haven’t seen video of the conditions, just trust me, they were bad!)

The heavy rain and wind couldn’t kill Jen’s and my excitement on race morning though. We each had four layers of clothing on our upper body, the top layer being waterproof – or so I thought. I was much more nervous about the race than Jen, not having completed a marathon in almost a year. I wasn’t sure what my finish time would be, and I didn’t want to hold Jen back from having a great race experience. So, when we got to the starting area, we said our goodbyes.

I felt okay the first half of the race, even though I knew I was already completely soaked by mile 3, despite my layering attempts. Around mile 12, I realized my gloves, which I thought were waterproof were so wet and cold that they were cumbersome on my hands. I peeled them off and stuck them in my windbreaker, not knowing if I was making the right decision. (I detest having cold hands while I’m running.) A little later, I began to feel sick. So sick that I pulled over to the sideline and started to gag. But, I pulled myself together, and reminded myself of two other situations when I made it to the finish line despite feeling this way: my first marathon in Phoenix and Ironman Chattanooga. (Both of those experiences are also in my book.)

In addition to having tummy issues, I was also fighting a mental challenge – low self-confidence due to feeling unprepared for the race,. (Again, due to my injury.) Trying to deal with the relentless headwind (about 28 mph with gusts up to 50 mph) and driving rain, I could feel myself breaking down mentally and physically. My feet were completely soaked. There was no avoiding the water. It was moving like small, cold rivers in the street. There were several points on the course where I had to give myself a pep talk. I was on the verge of tears during a good portion of the last half of this race.  (And I do this for fun?!?)

In the end, I did make it to the Boston Marathon finish line in an upright position.  I was disappointed with my finish time, yet relieved that I had finished the race. This marked my third Boston Marathon finish, my 148th marathon, but most importantly it was the completion of an important milestone of a good friend. I was glad that I had made the trip, despite my miserable race experience. At least I returned to marathon racing and got to celebrate with a good friend. 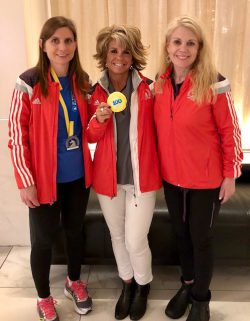 Two days after I got home from Boston, it was time to go to England. Unbelievably, London was experiencing the opposite weather conditions as what I had experienced in Boston – a heat wave had descended upon most of Europe. It was so hot that race organizers had already started sending out weather warnings about it.  At this point, I was starting to think being sidelined from running was not such a bad thing after all.

Allen and I arrived in London the Friday morning before the race. As always, we hit the ground running, making the most of every minute in this fabulous city. On the day we arrived, our tour company – Marathon Tours and Travel – treated us to a small group walking tour of London. It was led by Roger, the husband of Kathrine Switzer. (Kathrine Switzer became the first female to run the Boston Marathon in 1967. More on her later.)

Roger is as impressive as his wife. He is articulate, highly educated, and very knowledgeable about the city of London. He is also in very good shape. Allen and I had a hard time matching his quick walking pace. All in all, spending two hours with him was a delight. We learned many things about London that we would have never know, had we not been invited on this tour.

That evening, Allen and I attended the Marathon Tours and Travel reception. The owner of the tour company knows Kathrine Switzer well, and arranged for her to make a guest experience at the reception. Meeting Switzer, a pioneer in marathon running and women’s rights, was one of the highlights of my trips. Kathrine’s message to our tour group was one I will never forget. She reminded us that that sometimes positive things can come out of negative events. Kathrine was referring to her 1967 Boston Marathon race where she was told she could not run because she is female. She was shoved to the side of the race, her bib ripped off her chest. Kathrine ran the race despite the harsh treatment, making history as she crossed the Boston Marathon finish line. She paved the way for other women to participate in the sport of marathon running, and I will forever be grateful for her courageous act. 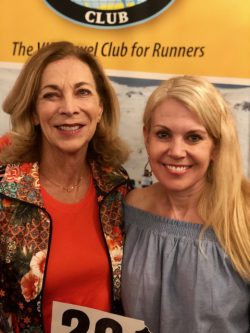 The next day, the day before the race, Allen and I enjoyed a fabulous all-day tour of the sights of London. We lucked out, and were assigned to an exceptional tour guide. We enjoyed every minute of our day together. The weather was beautiful – a sunny cloudless sky with temperatures in the mid-70s. It was perfect walking around the city weather but not so perfect race conditions.

My rule of thumb is to add 20 degrees to the current temperature to get a “running temperature.” So, if the temperature is in the mid-70s, it would feel like running in a temperature in the mid-90s. This is exactly what happened in London, a city known for its cool, cloudy weather. Full sun and no cloud cover whatsoever, did not help the situation on race day. The 2018 London Marathon went down as the hottest race on record. In a matter of six days, I went from one of the coldest races on record (for Boston) to the hottest race on record (for London). Lucky me.

What I like about the London Marathon is the spectator support the crowd gives to all the runners. I have never seen anything like it, not even at Boston or New York City. (I think the weather drew every single Londoner outside to support the event.) My run did not go so well, despite my efforts to keep cool. I doused my head and body with water at every single stop. I did finish, as did Allen, but once again, I was disappointed with my time. I spent my walk to my hotel analyzing what went wrong. I’m sure it was a combination of factors: the heat; having run Boston six days prior; not being used to the distance after being out almost a year with my injury.

I wasn’t allowed to feel sorry for myself in solitude though. On my walk back, I have never been congratulated so many times. The British like to say, “Well done,” and I did not get tired of hearing it over and over. The continuous praise reminded me that the people congratulating me didn’t know my finish time, and they didn’t care. What they were in awe of was the fact that I prevailed and finished a 26.2-mile race course. They all seemed to be amazed.

It was a good lesson and reminder for me. I know that I am hard on myself, and sometimes I’m guilty of defining my self-image by my race times. If I don’t run a sub-four-hour race, in my mind, I failed. However, seeing the look of admiration on so many people’s faces, as I made my way back to my hotel gave me the boost and reminder I needed. I am still learning life lessons after 149 marathons. I’m being reminded to enjoy the journey. After being out for almost a year, I’m truly thankful I can run again, even if I’m not quite as fast as I’d like to be… yet. 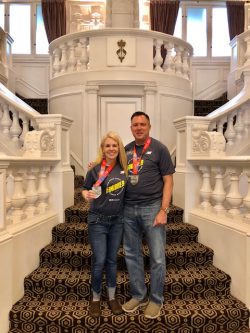