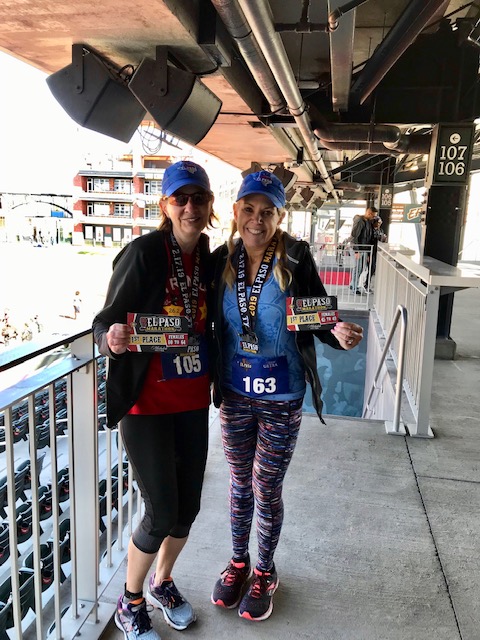 In the post 9/11 world, it’s a very disturbing feeling when the pilot announces your plane has been diverted to another airport, just as it is about to land.

But that’s exactly happened to me on my way to the El Paso Marathon earlier this week. My first thought was there must be a security breach in the Dallas airport – where we should have landed. My second thought, as I discovered none of the passengers around me understood the name of our new destination, was that we were being hijacked.

Luckily, that fear was unfounded, and we eventually touched down safely in a place called Fort Smith, Arkansas –the refueling Mecca of the Southwest. Ha! My fellow passengers and I learned that as we were hovering over Dallas airport, waiting for clearance to land, we were getting low on fuel. So, we were sent to another airport 30 – 40 minutes away to get more fuel before making another attempt to land in Dallas. Say what?!?

This made no sense to me, but I know nothing about aviation, other than customers are at the mercy of the airlines. But, hey, it’s not all bad. I can now proudly color in another destination on the “places I’ve been” map — Fort Smith is checked off the list. Thank you, American Airlines! In math only understood by the airlines, we somehow were able to fly 30 minutes away from Dallas to get the fuel that wasn’t there for us to land in Dallas the first time – this five-hour refueling escapade, of course, made me miss my connection to El Paso.

But I digress. This is not a story about Fort Smith, Arkansas. (Despite the title of this blog.) It is about running and my experience at the El Paso Marathon. Despite this travel snafu, because I like to look at my adventures with a glass half-full perspective whenever possible, the rest of the weekend went … very well. I got to spend some time with one of my best friends, Cathy, back in a city that the Walker family called home for four years. I was supposed to spend the whole weekend with Cathy, but because I got in later than planned, we only spent 24 hours together. However, we made the most of them. (I am grateful to Cathy for being so flexible and helping me get to and from the airport throughout my abrupt flight changes. Yes, there was more than one flight change. I’ll spare you of the details.)

Cathy, who is also mentioned in the book, is one of the exceptional friends I’ve made through my marathon journey. We met while we were both on a mission to complete a marathon in each of the 50 states, and our paths crossed again and again. Cathy has an incredible story. She is an accomplished attorney who didn’t run her first marathon until she turned 50. Cathy has since completed almost 100 marathons – and at least one in each of the 50 states. She keeps getting faster too and recently qualified for the 2020 Boston Marathon.

I didn’t have a time goal for the El Paso Marathon. In every race I try my absolute best, hoping my efforts will be rewarded. This race was no exception. Although I gave it my all, I was really disappointed with my finish time. I can’t even put my finger on the disparity between my effort and my end result. I felt really good throughout the race. I was absolutely loving the feeling of the sun on my body combined with the cool temps – aside from a gusty wind, the race conditions were nearly perfect. I’m just not sure what happened to my overall race time.

Though I was disappointed in my time, the finish line did have a pleasant surprise in store for me. When I hobbled over to the official timing table after completing the race, I was informed that I had won my age group. Even more exciting, was the news that Cathy won her age group, as well.

Perhaps, there was something to be learned from my inbound flight on American Airlines and my El Paso race result. As I reflect a week later, I keep coming back to this thought: Sometimes, maybe you should divert (your attention) and focus on the positive. Sure, I’m frustrated with my slower, post-injury marathon times. However, I’m still out there running and finishing races. Even more importantly, I am relishing the opportunities to reconnect with good running friends like Cathy.

I’m a competitive person who needs to set goals, so I’ll never stop caring about my time. It’s just who I am, but maybe I could learn a bit from my Arkansas detour. I’m going to try harder to divert (or focus) my main attention to the positive; stopping to refuel (and train more efficiently); and then attempt another landing (or faster marathon finish). All of this will *hopefully* bring me to my desired destination. I had a great time in El Paso, even if everything didn’t go as planned. I just hope I can remember that positive for next running (or travel) obstacle I encounter along this great journey!

Thank you all for continuing on this ride with me.