I’ll Remember Marathon No. 150 for Way More than the Number

When it comes to marathons, I am not a numbers chaser. (Now, having babies is a different story…. Just a little Mom o’ 6 joke!) As I stated in my book, I could not care less whether I end my marathon journey at 160 marathons or 500 marathons. I have only focused on two goals while running –  race times and the race location (or a combination of the two).

Now, don’t get me wrong. I’m all for celebrating the marathon milestones of others. Counting marathons is great and setting goals in the area of quantity of marathons is admirable. I am all about celebrating those kinds of achievements. I could not have been more thrilled for my good friend, Jen Metcalf (“Big Sexy”) when she recently reached her goal of running 100 marathons. This was an important goal for her. This made her achievement important to me (and her millions of fans and followers).

Speaking of counting races, let me introduce a phenomenal runner who will soon be reaching his 1,000-marathon goal. And no, that is not a typo. My friend, Vincent, is on track to hit 1,000 marathons by summer of 2018. There is a good chance you have not even heard of Vincent. There is a reason for that. He is one of the most talented long-distance runners I know, but also one of the most humble. He is not a self-promoter. He proactively stays away from social media and some of the drama that comes along with it.

Vincent contacted me to pick up his race bib for the May 2018 Providence Marathon. He would miss the packet pickup because …. you guessed it! He was running a 30+ mile trail race in another state the day before.  That’s how you get to 1,000 marathons while still in your 40s. He runs two marathons a weekend, every weekend. 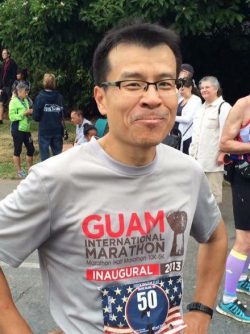 I was happy to pick up his bib for him. We runners like to help one another out as much as possible. I was even happier when Vincent caught up to me on the race course, during the Providence Marathon. Another very intriguing trait about Vincent is that despite running his high frequency of races, he is still pretty fast! I’ve asked him the secret to his success a couple of times. He has told me he takes an ice bath after the race and runs only three miles per day in between races.

I was fortunate that Vincent ran with me for a good portion of Providence Marathon, trying to keep me on pace so that I could complete my Boston Qualifying (BQ) goal. (I have just four states left before I complete my final running goal — to post a BQ time in each of the 50 states.) Spoiler alert: Rhode Island remains on the list of states to conquer, even after Providence Marathon. Despite Vincent’s efforts to try to help me, I couldn’t make my BQ time at this event.  At mile 21, I had to tell Vincent to go ahead. I could tell my pace was slowing him down.

Going into the race, I knew it was unrealistic to even think I might get a sub 3:55 at this race. I had just recently been cleared to run again, after being off for eight months with my one and only serious injury: a fracture in my hip / pelvic bone. However, I decided to go ahead and go to the race. I had booked a spot at the Providence Marathon expo months in advance, hoping to market my book in the Northeast. As the date of the race neared, I realized my pace was far from pulling off my BQ goal. Even though I went into the race with realistic expectations, I was extremely disappointed when I crossed the finish line with a time of 4:11.  I’m not sure how many times my husband will be supportive of me going back to Rhode Island to get this time goal. (And I can’t blame him!)

The silver lining of my trip was that I had a great time at the Providence Marathon expo. I am not a salesperson, and in the days leading up to the event, I dreaded the thought of trying to promote my book.  The expo, however, turned out to be the highlight of my trip. I met so many amazing, wonderful runners and ended up seeing some friends from the past. I was inspired by the stories of so many. 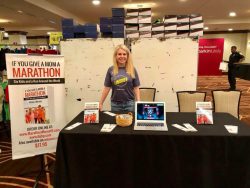 For instance, I learned there is a big organization in the Rhode Island / Boston area that trains high school students to run a marathon. It’s called DreamFar High School Marathon. About 150 of these students were participating in the Providence Marathon. It was so excited to see them on the race-course, in their neon orange tank tops. Throughout the race, I kept thinking – It would be so cool to bring this idea back to my home turf of Evansville, Indiana!

Though my 150th marathon didn’t yield the result I had hoped for as far as race time, I still won the weekend. I gained another new experience, expanded my circle of friends, and was reunited with friends from the past. I’m realizing now that 150 is more than a number. It represents a collection of experiences, friendships, and adventures. It has expanded my horizons and (more importantly) my self-confidence in ways that I could never have imagined before I toed the line of race No. 1. 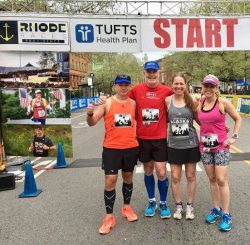