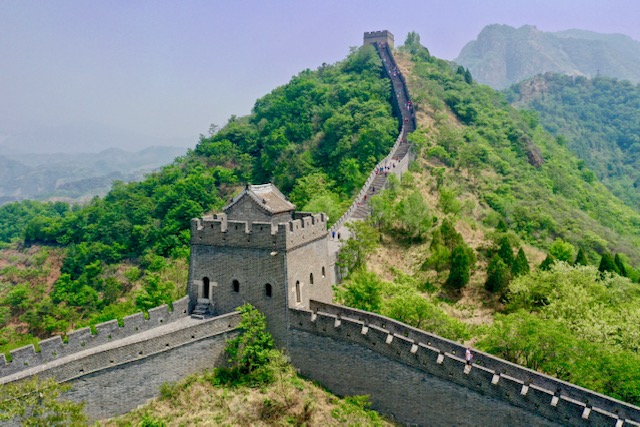 So, what did I learn after a week in China? 1) Social media hiatuses can be good. 2) It’s hard work even getting up to the Great Wall (and then there’s the stairs!). 3) The Chinese people are very friendly and enthusiastic.

I was in China last week to run a race. Big surprise there. The Great Wall Marathon was a 49th birthday present from Allen last year. I have visited much of Asia (even living in South Korea in high school), but I had never been to mainland China. The Great Wall has always been a bucket list destination, and I was thrilled when Allen said he wanted to join me on this trip. He had never been to Asia and was eager for this experience. With almost a year to plan out childcare and trip details, we had plenty of time to prepare for our week-long Beijing adventure.

And what a grand adventure it was. Out of 168 marathons, there are three I would rank as the most challenging – Petra Marathon (Petra Desert in Jordan), Big Five Marathon (South Africa), and yes, the race I just completed. All are classified as “adventure races”, and they are managed by a Danish company called Albatross Marathon Adventures.

There is a chapter in my book about the Petra race, and if you recall, I got nervous as that experience drew nearer. The same thing happened with this trip. I had never been to a communist country before, and a couple of the rumors I had heard about China were a bit unnerving. The first rumor – was most likely just that – a rumor. What I had heard was that the Chinese government (at its discretion) can imprison Americans, and there is nothing the United States can do to aid in the release of their imprisoned citizens.

I don’t think that’s true. (Though, it would be highly advisable not to break the law in China.) In fact, I’ve never felt safer and more welcome in a country than I did on this last trip. China seems to embrace tourism with open arms, and despite the cultural differences, I will always be grateful for the warmth and hospitality from the Chinese people directed toward our group.

The other rumor I heard was that the Chinese government shuts down your social media as soon as you arrive into their country (unless they have already confiscated your phone because you are in their prison – ha! Just a little joke.) This, to my initial dismay, turns out to be true. As a foreigner, there is a way to get around this issue by downloading a virtual network. I am not that tech savvy, however, and I was leery of giving an unfamiliar network access to the information on my phone.

Allen and I both opted to go social media free for the week. This decision resulted in another revelation. Having no access to social media was freeing, liberating, and made my trip more fun! I felt so much more interactive with the fellow runners in my Marathon Tours and Travel group. There were about 60 of us, and we all had a blast together. It’s amazing what happens when you’re not glued to your phone. I was able to communicate via text with my family and friends back home, but that was about the extent of the services offered by my phone in China. I couldn’t even do an online search, and guess what? I didn’t miss it.

I loved escaping the social networking world so much that I’m considering proactively limiting my social network time in the future. I discovered I am much happier without it. Thank you, China, for inadvertently teaching me this lesson. Hopefully, I’ll remember it from time to time even when there’s not a government ban in place.

The third important lesson I learned from China is that we, as Americans, have a long way to go in keeping our streets and buildings as clean and as aesthetically pleasing as China’s. Now, don’t get me wrong. The Beijing area is not perfect. There is a lot of smog and pollution – all part of having a population of 22 million people and the traffic that goes with it.

However, the cleanliness of a city of this size was astonishing. Not only was there no trash on the busy roads, but there were rows of well-manicured flowers aligning the sides of the busy highways, as well as in the medians. Most of these flowers were multicolored roses growing against the highway fencing. Elaborately sculptured bushes and patches of flowers lined the roads, as well. During our tours of Beijing, the flowers created a great diversion from the chaotic traffic that surrounded our tour bus. (Beijing seems to have very few traffic laws.)

Let’s talk about the food

I was a little afraid about this part of the trip before I embarked on this journey. I consider myself an experienced international traveler, but having lived in Korea, I knew that real Asian food can be quite different than our Americanized version. Call me crazy, but I like to know what it is I am eating before I consume it. I imagined myself eating a lot of rice throughout the week – a safe staple that could possibly help my race performance and recovery. (Go carbs!)

After arriving in China, I discovered that my food fears were unfounded. I ended up eating a plethora of delicious Chinese dishes. Thanks to our travel company, Marathon Tours and Travel, Allen and I were well fed the whole time we were there. We quickly learned that we really enjoy authentic Chinese food – from Peking Duck to a variety of filled dumplings. It may be difficult to go back to the Midwest and order sweet and sour chicken from one of our local restaurants.

Considering the large quantity of food Marathon Tours included in our array of cultural experiences (They took care of us!), I was happy we were in China to participate in an athletic event. I think Allen and I both felt we needed to burn off some of the fantastic Chinese food we had been tasting. 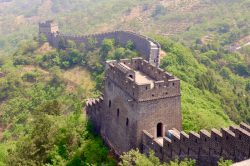 The Wall really is Great!

We were both excited to run our respective races: Allen the half marathon, and I the full. We knew the reputation of The Great Wall Marathon course to be brutally tough, and we were relieved to find a pre-race inspection of the course on our trip itinerary. During that time, Allen and I decided that neither of us would be running on The Wall. In our opinion, it was too dangerous. The steps are steep and are widely varied in height and width. I’m only 5’2”, and some of the steps approached the height of my waist. Apparently, the ancient Chinese were not thinking about future marathon runners when they built The Wall. Ha! I guess they were focused on making the steps difficult for invaders to reach them. 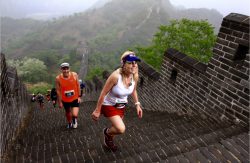 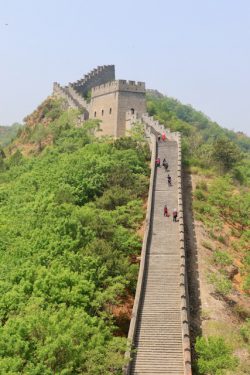 Even though only a portion of the 26.2-mile course is on The Wall, the remainder of the marathon is almost as relentless. You must run up a very steep ascent to initially get to The Wall. Once this mountain-like hill and a section of The Wall are completed, the runners must go down the mountain, following the course through several villages. The village streets were lined with the locals. I have never seen such excitement in the faces of spectators. I am pretty sure the people of the villages were not used to seeing Westerners – especially Western runners. (It was a two-hour trek by bus from Beijing to get to the race.) I saw so many middle-aged Chinese women, sincerely trying to encourage me. They looked me in the eyes, gave me a thumbs up sign, and yelled “jia you”, meaning “let’s go.” (Literally, it means filling a machine with petrol, but it’s a widely adopted cheer of encouragement these days.) I had the feeling that perhaps they would like to be out there running with us. My sincere hope is that one day many of these ladies will be able to train for and run one of the three distances offered by the race. (Running is exploding in popularity all across China these days.)

What impressed me the most, though, was the number of children who had lined the village streets to cheer us along. I must have given 100+ high-fives to these energetic children, some of them were even jumping up and down with excitement. At two different points on the course, young teenagers stopped me to take selfies with them. I was honored. The villagers made the other runners and me feel like celebrities. I’ve never experienced anything like it. It was awesome! 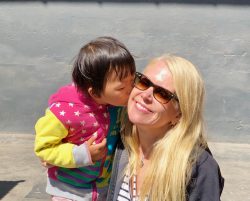 My finish time goal for this race was six hours. I was extremely excited when I crossed the finish line at 5:26:57, placing third in my age group. I think I could have been a bit faster on The Wall, but I had done no special training on stairs. Maybe I should have! 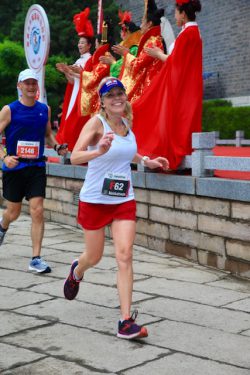 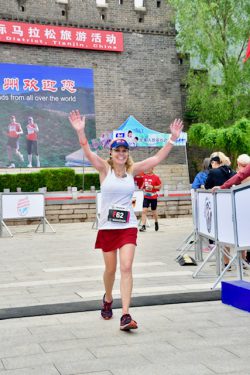 I do have a valid excuse though. I was focused this winter, trying to fit Ironman training in my busy schedule whenever I could. Because of this intense training, I knew I had the cardio conditioning to complete the race. But I also knew I would have to wing it on the stair climbing. There are time cutoffs in the Great Wall Marathon, and I knew I was taking a chance. Another lesson learned: Sometimes you can’t balance or fit in everything. Picking and choosing the most important aspects of a training program are key. I wasn’t going for speed at The Great Wall — experiencing China and the race itself was my top priority.

Plus, finishing with a time 10 minutes faster because I had done lots of stair training would have meant nothing to me. I was just happy to be in China, actively experiencing The Great Wall, the local villages, and the beautiful city of Beijing.

Allen shares my philosophy. Although he was happy with his half marathon time, the entire China experience is what he’ll remember forever. Races like The Great Wall (and Petra and the Big Five) are all about the memories made, not the race time. The people we met on this trip and the places we saw were nothing short of amazing! 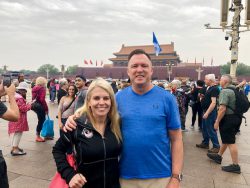 I am so happy I was able to experience these Great Chinese lessons with my best friend, Allen. Together, we conquered The Wall and created memories for life. It was truly one of the best trips ever.